This tag is associated with 3 posts

Why I Don’t Do Reviews (Warning: Contains Reviews)

It was bound to happen just days after I post my only review, in which I clearly state I don’t normally do reviews, that I get sent a number of CDs to pass my judgement upon. Although not a dedicated music site, many releases have landed on the desks of The Camel’s Hump*, and, for one reason or another, we feel inclined to write about them.

I never feel so inclined. Without wanting to discourage or dismiss the efforts of reviewers, to be frank I find them a little too easy. They’re a bit of an excuse to avoid actual writing and, when uninspired, they’re little more than filler material.

They can also become the causes of very ugly arguments. Someone, somewhere, will be offended by your opinions, even if you’ve been relatively nice, and take it upon themselves to dissent in the strongest terms. Reviews are potential cans of worms, and I prefer to steer well clear.

That said, the selection I’ve received have made my job easier. They’re neat little four or five track EPs, and neater still all pretty good. 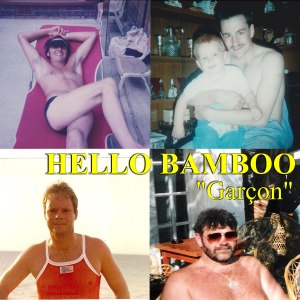 You’d be forgiven for believing the four slabs of hairy, testosterone pumped man meat that grace the cover of Garçon were the members of Hello Bamboo. Their riffs are beefy enough and their sound sweats manly juices. As it happens, these prime examples of the male beast are their fathers, and families are clearly a subject of concern to the band. As are the subjects of life after death, David Gest and cheap clothing retailer Matalan, if this collection of recordings is anything to go by.

It seems the only way to legitimize more traditional heavy guitar music in the post-rock era is to play with a sense of irony. Although by no means a novelty act, they do not take themselves too seriously, which only adds to their charm. For example, on The Cycle of Domestic Abuse, probably the best track, they juxtapose dark imagery of an abusive patriarch (“Daddy, why did you fuck Mummy up?”) with a ridiculously over the top, old fashioned guitar solo, and make it work surprisingly well.

Calling your band Fighting and your first release Thriller II (presumably to be followed by Led Zeppelin IV-A) suggests its creators are either geniuses or idiots. Or both. Whilst not in itself punk in its stylings, it follows punk sensibilities – keep it fast and grimy and no one will notice or care if you’re rough around the edges. Their sound is reminiscent of the sadly defunct Test Icicles and the emerging Pulled Apart By Horses, but with less art college pretentiousness, and a distinctly northern no-nonsense edge.

The duo take turns on vocal duties, although I can discern little meaning from the indirect lyrics, except that on the opening, and best, track Keelie Needs Practice, someone called Keelie needs to practice. Their main raison d’etre appears to be the acquisition of girls, booze and their due amount of fun. Although let down by the song Guest Appearance Bruce Springsteen, they deserve respect too on the strength of this promising recording.

I can’t listen to these four tracks, probably the best selection from those on offer in this article, without thinking of Beck, which, for me, is a huge compliment. Although bearing little vocal similarity, the sound, achieved with a mixture of samples and live instruments, combined with the whole being a solo effort, is reminiscent of the artist, whom I consider one of the most inventive and distinctive recording artists of the past twenty years. I wouldn’t be surprised if there was also a pint or two of the Eels influence pumping through this CD’s veins.

A trawl though the bandcamp back catalogue of Stephen James Buckley reveals a series of short studies that sincerely chronicle a life by the instalment plan. Previously more of a troubadour, his heart worn on the strings of his acoustic guitar, this is an evolution in his sound – a maturing – although he still sings with emotion, irony and wit, such as on She Drove Me Like She Stole Me, one of the highlights here.

*Not physically, of course, as we are a loose collection of writers, with our respective desks scattered all over the world. Some of us don’t even have desks, just laps.

It starts with a slow pounding intro, then we’re thrown straight into a ferocious and angry record from hardcore punks Dashwood.

Clocking in at only 37 seconds Splinter is one of the three stand out tracks on the EP. It will make you want to break things – you can almost see the bodies flying across the pit whilst listening to this. Augury follows immediately, giving you no time at all to regain composure. A little more melodic, but no less furious than the previous track, this is a brilliant example of a hardcore punk song and many bands that call themselves hardcore should sit down and take notes.

Persist, another one of the shorter tracks (59 seconds) is a brilliant precursor to the fantastic final track Idle Minds.

However, it’s not all amazing. Interlude, is really, really annoying. We go from awesome hardcore punk tracks, to a more mellow piece. If you’re a hardcore band, don’t give your listeners any respite. Keep it fast, angry and brilliant.

Aside from this tiny niggle, this really is a brilliant EP, and if you’re a fan of Gallows, Ceremony or Never x Again , then this record is definitely something you should get hold of.

Hurt/Heal is available in CD format from Pornography For Cowards, and on tape from Honey Bucket Records from 5th February 2012.

I wonder, am I the right person to review an album of pop punk bands I probably won’t really like, covering pop songs I’ve probably not heard? Probably not, but I’m not going to let trivial things like that get in the way. 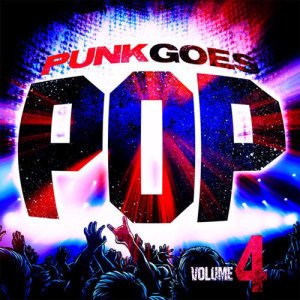 We start with some squeaky pop punk band covering “Just The Way You Are” (Bruno Mars). I spent most of the time listening to this song trying to remember the name of Coheed and Cambria, just in order to compare the voice of Pierce The Veil’s singer to. I think the song was ok, aside from Joe Pasquale on vocals, though.

Then there’s a song I haven’t a clue who it’s originally. The husky woman singing has a decent voice, though, and despite not having a clue who “Little Lion Man” is originally by (turned out to be Mumford and Sons), I fully enjoyed Tonight Alive’s cover… up until where it all went a little bit Paramore. Next on offer is Woe Is Me with a god awful performance of Katy Perry’s “Last Friday Night”. Seriously awful, and the less said about it, the better.

Next we have a band called The Ready Set, with “I Roll Up” by Wiz Khalifa (who?). I’m confused. There’s nothing punk about this, and I don’t mean in a punk fascist, “that pop punk isn’t punk” way. No, I mean, this is actually just a straight up pop/urban song. I can’t hear a guitar, or a real instrument. Did they forget to record their own version and just sing over a karaoke backing track two hours before the deadline for submittal?

Things start to improve when we get to Sleeping With Siren’s version of Cee Lo Green’s “Fuck You”. Not too bad at all, the strings were a nice touch and even took my mind off the overly intrusive drums. It’s nice to hear a few swears, too. In a bizarre twist of events, we get a second good song in a row with Go Radio’s cover of Adele’s “Rolling In The Deep”. It’s good, straight forward and no messing about, just a bit ballsier. The bridge was brilliant, hand claps, and then that key change. Nothing bad about this at all. Could this streak last?….

In short, no… For All Those Sleeping’s cover of “You Belong To Me” by Taylor Swift is stopped after 12 seconds, but then decided I should give it a longer chance. Another 12 seconds later, I’ve skipped to the next song, Chunk! No Captain Chunk! With Ke$ha’s “We R Who We R”. This is actually good, and I don’t even hate the screaming bits. It, works, y’know?

When I get to A Skylit Drive’s rendition of Eminem’s “Love The Way You Lie”, I’m torn. It’s got ups, and it’s got downs. It’s really quite 50:50. I don’t know whether I like the screaming bits, sometimes it works, and then sometimes it doesn’t, and then I’m annoyed by pop punk singer’s habit of singing in a key which is obviously too high for them to comfortably sing in. However, it’s not the worst thing on this album, but I can safely predict that nothing will be worse than For All Those Sleeping’s offering.

Auto-tune ‘o clock next, with Allstar Weekend’s cover of Yeah 3X, by Chris Brown. A big “meh” to this one. Moving on. I See Stars and we have a wall of sound, interspersed with with standard melodic hardcore bits in their cover of Britney’s “Till The World Ends”. It’s passable, I’ll give them that.

Do I really want to hear Silverstein playing a Kanye West song for 8 minutes? Not really, I’d rather run repeatedly into a javelin at face height. Still, without hearing the original version of “Runaway”, what I listened to of this song is very good, but just too long.

Punk Goes Pop Volume 4 closes with The Downtown Fiction’s take on Super Bass by Nicki Minaj. It wasn’t bad, no, I couldn’t say it was bad. But it wasn’t as awful as For All Those Sleeping… but it ain’t good, either. The worst thing is the repetitiveness, but I can hardly blame The Downtown Fiction for Nicki Minaj’s poor song writing, can I?

P.S. I’d like to thank Google for helping me find out who the hell the original performers of many of these songs were.